Johnson Revives his Bitter Feud with
Cobin and Freedom Orchard 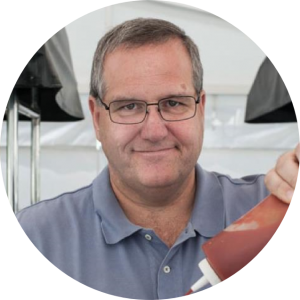 One of Johnson’s perennial whipping boys is John Cobin (right), his erstwhile partner in a former incarnation of Johnson’s Galt’s Gulch Chile affinity fraud. We discussed this episode in our blog post “When is a Partner not a Partner.”

Soon after Johnson sabotaged the first GGC partnership to part ways with Cobin–we suspect deliberately to save himself the $250,000 fee he and Berwick had agreed to pay–Cobin began his own libertarian real estate project right next door to GGC called Freedom Orchard. So began a feud between the two that rages to this day, each one calling the other a scam artist.

In fact, we have had reports from investors who were wise enough to eschew GGC, saying that one of their main reasons was Johnson’s trash talking about Cobin and Freedom Orchard. He spoke such venom, bordering on all-consuming hatred, that just a peak into such a level of psychopathy was quite enough for them. Phrases such as, “We’ll destroy Freedom Orchard…” come to mind. Clearly, Johnson forgot one of the primary lessons of Salesmanship 101: do not speak ill of your competitors.

We had and have no dog in that fight but were bitten nevertheless when Johnson spent many tens of thousand of dollars, $30,000 in one month alone, in GGC investor money for lawyers, first paying two firms to research suing Cobin for violating an unenforceable non-compete agreement, and later suing Cobin for libel. Johnson likely could not have been successful in the libel case because Johnson is, of course, everything Cobin said he is–a liar and a scoundrel–and far worse. However, Johnson, after pissing away our money, dropped the case, so we’ll never know.

We review this sordid history because FCF Johnson revived the feud on Facebook, the current forum from which he excretes his libel and lies. Recently, Johnson accused Freedom Orchard of fraud for selling lots on a property that Freedom Orchard didn’t own.

This charge piqued our interest. We know none of the particulars of Freedom Orchard and can’t say who did what to whom (!), nor do we care. However, with this accusation we find a perfect example of one of Johnson fav tactics that armchair psychologists refer to as projection.

Yes, friends, Johnson did exactly the same thing–he sold lots on a property GGC did not own.

Johnson signed a purchase and sale agreement for the Lepe property on May 13 2013. He and the seller, Guillermo Ramirez, signed closing documents on Aug 14 2013. Between those two dates, Johnson sold lots to 14 GGC investors for over $1.6M when GGC did not own the property.

Now, that’s projection for you.

The Lepe closing document included a nine month payment schedule. As far as we know, Johnson didn’t disclose that to these 14 investors. He also didn’t reveal it to his sales staff, instead telling them that the property was free and clear.

From the August 14th closing through December Johnson was forced to pay $600,000 of investor money in penalties for three missed payments.  Then, facing even more penalties and getting desperate, Johnson defrauded an investor for $975,000 by having Ramirez write a letter saying that all payments were made in full with the exception of the final payment due in April 2014. This was a lying scheme the two concocted to get at that money, since the investor had made his purchase conditional upon all installments being paid through December 2013.

Now, many business people get in over their heads and can’t make payments. And our lawyer has told us it is legal to sell land held with only a purchase and sale agreement or with a series of payments due, or without the required zoning. So far, you might think that this is simply b

ad management, and maybe that’s true for Freedom Orchard, we certainly don’t know. But we do know about Galt’s Gulch Chile and if you think that of Li’l Kenny Fraudster, of course you’d be wrong.

In Chile, to sell lots before they are lots, certain requirements detailed in the Urbanism and Construction Act have to be met. For example, the seller must buy a bond or insurance to protect the investor. Johnson, however, did not meet that requirement. That is a felony punishable by up to five years in jail.

Sadly for us investors, Johnson can be caught for only one felony for this particular crime. That is because the contracts Johnson used are not enforceable in Chile. Only one investor who had his lawyer write his contract, has an enforceable contract. Read more about Johnson fraudulent contracts in our blog post “We Should Change the Name to No-contracts-ville Chile.”

Johnson tops his mendacious screed with the biggest lie of all: that he doesn’t owe anyone money as witnessed by the lack of legal

For example, Johnson’s administrative assistant from El Salvador is owed $8,132.53 which is a chunk of change for a Salvadoran. She ended up homeless around Christmas 2014. We investors put her up at the farm for two weeks and then bought her a plane ticket back to her family.

Johnson also didn’t pay his farm workers for months, salaries or benefits. They took to grabbing the lemon sales money before he could get it. We caught them up when we took over the farm. Johnson was still not paying the Chilean farm workers after he returned and has 13 cases against him with the pension administrator (see here and here).

And of course he owes all of us investors money, $10 million, in fact. (Apparently Jerry Folta hasn’t demanded a refund.)

The only number lower than Johnson’s IQ is his credit score. So for him to say he doesn’t owe anyone money is a truly fitting end to this example of his psychopathic projection.

Btw, we’ve discussed Li’l Kenny Fraudster projection before. Check out our other posts where we exposed his Paraguay passport scam, his trashing of the Lepe property, his cutting down of protected trees… we could go on and on.

If there’s one thing you can be sure of when dealing with the Fraudster: whatever he’s accusing others of doing, he’s guilty of it himself.