“The rooms in the Inn at Galt’s Gulch and the freestanding Guest Hacienda are projected to rent for $150-200 USD per night, with occupancy levels at 50% in 2014, increasing to an average of 75% occupancy thereafter. These units are projected to be in very high demand. They will have road access, 220-volt power, hot and cold running water, Internet access, television, full maid service, room service and amenities typical for upscale hotels, while allowing those staying there to experience all of the beauty of living at GGC.

“For investors in the organic farm offering, the Inn at Galt’s Gulch and the Guest Hacienda represent steady additional passive income that will be distributed to the owners of the GGC organic farm as part of their monthly revenues.” Source: Ken Johnson in GGC Farm Program Overview part 1.pdf.

The following is an eyewitness account from a former employee.

In September 2013, Ken Johnson asked the farm manager to develop projections for the GGC farm products for the years 2014-2020. The farm manager was conservative with his numbers. His plan included investment in organic fertilizer and seed, a greenhouse, water flow and well improvements as well as revamped and new farm equipment. He was also adamant that a nursery for the new crops was needed and that a large expense in construction and staffing would be required. The projections showed small profits beginning a few years after the

implementation of all the capital improvements.

The problem was that since all the farm investors’ funds went to Guillermo Ramirez for the prodigious land payments with late penalties, and also to the ongoing expenses of the unprofitable farm, there was no capital left for investment into the farm manager’s plan. When the farm manager expressed his opinion on the severe water deficit for the existing lemon orchard, he was promptly fired.

Also at that time, Johnson asked the sales staff for projections for renting the farm worker cabins, or the “haciendas” at Galt’s Gulch Chile. The plan was, in an area with limited choices for accommodation, potential GGC investors could come stay on the property while contemplating a purchase or looking to choose their residential lots. The guest cabins idea wasn’t a bad one, but in Johnson’s hands it turned out to be just another sales gimmick: “five star” rooms for guests to rest their weary heads after a hard day of motion sickness from sitting in a filthy Jeep reeking of moldy pooch. (Editor’s Note: For more on Johnson’s patented hospitality during sales calls, see our previous posts, “More on the Joys of Working in Sales under Johnson” and “Feedback on Johnson from a Potential Investor.” We are NOT making this stuff up.)

The Lepe/Las Casas property had four cabins that went through partial remodeling in preparation for the April 2014 Celebration, 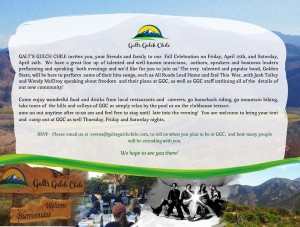 that is Johnson’s disastrous sales event at GGC. The renovations didn’t go exactly as planned. A hurried effort at renovation into guest quarters was at best a haphazard affair, and ultimately a waste of yet more investor capital.

The cabins were never meant for rental accommodation at modern hospitality standards. They are built from a mixture of adobe, concrete, cinder block, cheap lumber and tin. Only one of them had indoor water access, three of them had exterior baths with no plumbing or sewage. The windows are small and don’t allow for much ambient light. The local carpenters contracted to remodel the cabins had enormous difficulty as the walls and flooring were uneven and out of square. In the end, only two of the cabins were habitable.

Two of the lemon orchard ¨investors¨ visited their respective cabins in April 2014 and commented that they were not exactly haciendas. They are small, dark and should be torn down completely. This was 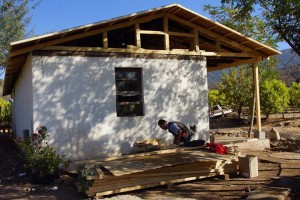 after thousands of dollars had been wasted on a hasty, ¨smoke and mirrors¨ remodel of them. The cabins sat low among the orchard trees, with windowless walls blocking the views of the surrounding mountains. They were originally meant for seasonal farm hands, had been vacant for a decade, were infested with rodents and insects, and would have been the last project addressed by any prudent manager since the farm was starving for water. (Editor’s note: see our post, “How Do You Say Potemkin Village in Español?”)

Yet our imprudent manager, Johnson, touts these shacks in advertising materials as first class guest accommodations that can rent for $200 USD per night with maid and room service. Adding to this exorbitant claim, he said he can rent them at a 50% occupancy rate or more, with the  Agricola farm investors reaping large dividends from the rental income. He even installed Direct TV in the shacks without televisions and installed satellite internet in a cabin in Carén [El Peñon] that doesn´t have electricity or water—more Potemkin Village maneuvers for clueless libertarian “investors.”

The Recovery Team and orchard investors are still awaiting any accounting on the revenue from these shacks. Recently, farm workers were butchering rabbits in one of them, but we doubt they were paying $200 bucks a night. Late in 2014, all of the shacks’ uncomfortable, moldy wicker furniture was repossessed for non-payment by the vendor. 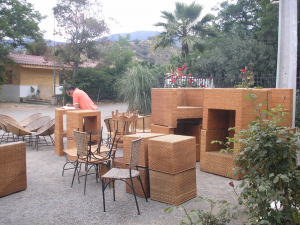 The Only Real Hacienda at Galt’s Gulch Chile

The main house on the Lepe property—the only real hacienda—also went through a hasty remodel. The majority of the effort was devoted to a 2,500 sq ft wooden deck spanning the entire rear of the house. The deck is quite impressive and wowed the celebration

attendees, for sure, but what they didn’t know is that weeks were spent modifying the wooden steps and concrete landings so that a mangy, 17 year old dog could have easy access. Yes, GGC investors, the famous Remy cost you more than those nightly salmon dinners.

At least four building contractors have come and gone from GGC, not one of them paid in full for their services or expenses.

The first contractor for the deck installed pine ceilings in the main house before he was fired and eventually threatened by Johnson. The stone flooring and gutted bathrooms were never finished. Most of the lighting fixtures were removed and never replaced. The famous master suite where Johnson let weeks of garbage and soiled laundry 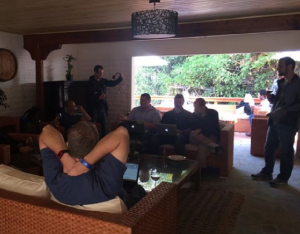 pile up in the sauna tub and on the linoleum flooring wasn’t renovated. This rodent infested building is dark, damp and dated. Johnson had the large French doors removed— this was later blamed on the Recovery Team—and never replaced (see in this photo), exposing the house to the elements and allowing the many starving street dogs to roam about freely, urinating wherever. The mutts spent most of their time lounging on the wicker furniture when not hunting the peacocks.

The contractors shored up the shacks quite well, but if you go, plan on bringing your own water, maid, insect repellent, septic tank, furniture and a generator.