When GGC began, Ken Johnson and Jeff Berwick arranged for John Cobin to incorporate an entity to hold title to the real estate and manage the development. Cobin incorporated Galt’s Gulch Chile SA, and that entity agreed to buy the El Peñon property. The ownership and funding of that entity was as follows: 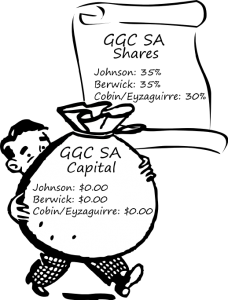 Johnson immediately executed his plan to defraud his partners of their shares. He instructed the project lawyers to incorporated Inmobiliaria Galt’s Gulch SA (IGG), and arranged to transfer GGC SA’s purchase and sale agreement for El Peñon to this new entity. The ownership and funding of IGG was as follows:

Vila and Cordova, the lawyers who incorporated IGG, held ownership for Johnson and Berwick, since the partners were out of the country at the time of incorporation. The lawyers were to transfer ownership when asked to do so.

Remember, too, that the corporate documents (here and here) for IGG, unlike those for GGC SA, name only Johnson as having a management position, and there is nothing about who is on the board of directors. As of incorporation of IGG, Berwick is neither a shareholder, nor a manager, nor a director of the company that was to hold title to the real estate.

While this was occurring, Johnson and Berwick were working with a second law firm in New Zealand to establish a trust structure to hold title to IGG. Johnson was the protector of the trust and Berwick and his wife were beneficiaries. The trustee was to be a New Zealand corporation. These lawyers also drew up the Heads of Agreement contracts, jurisdiction in London, for the equity investors of GGC.

Johnson told the equity investors that they would be beneficiaries of the New Zealand trust. This trust structure was never completed nor capitalized. The equity investors’ funds were paid into a law firm’s account in New Zealand and transferred to Banco Itaú in Chile. These funds were used to buy El Peñon on Dec 19 2012 (date of deed), and for working capital for the first seven or eight months of GGC’s operation, including Johnson’s compensation, although he claims he was never paid. (See blog post “I Never Took a Penny from GGC.”)

On April 26 2013, Vila and Cordova transferred their 100% ownership of IGG shares to Johnson and Andrés Chirgwin, GGC’s new lawyer. The share ownership and funding of IGG looked like this: 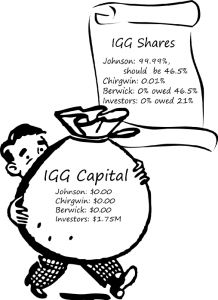 We suspect that Vila and Cordova didn’t transfer shares to Berwick because Johnson held Berwick’s power of attorney for GGC’s affairs. In a perfect world, Vila and Cordova would have notified Berwick of the impending transfer of ownership. However, the lawyers were treated to Johnson-esque abuse (crazy demands, crisis management, criticism, insults, non-payment–you know, the usual) and had had it with him. They were probably happy to follow the letter of the law and to be completely out of GGC.

Johnson owed shares to the equity investors and they soon began to agitate for what they were owed. The documents they received during the sales process said that GGC would raise $25 million in capital, so therefore their units of $250,000 would entitle them to 1% of the project. They had no way of knowing that the $25 million was a ridiculous pipe dream and that they were the sole source of equity capital.

As time went on, it dawned on them that they were not exactly treated fairly, and they demanded a greater ownership position than the measly 1% per $250,000 “investment” they were promised. Johnson, ever the generous soul, said, “Sure, I don’t care. I’ll triple your ownership. How do you like me now?”

Also, as part of the contract with Guillermo Ramirez’s Agricola Guipaca Limitada for the Lepe/Las Casas property, Johnson agreed to transfer 3% of Galt’s Gulch Truster [sic] Limited to Ramirez and 2% to Ramirez’s lawyer, Hector Ricardi. This was supposed to be a New Zealand corporation and trustee of the New Zealand trust.

When Chirgwin and Johnson parted ways in the fall of 2013, Chirgwin’s share went to Johnson’s thug, Ian Thornton. Thornton is a Chilean laborer who does a good measure of Johnson’s dirty work in exchange for cocaine money.

This is how the ownership and funding looked in Oct 2013: 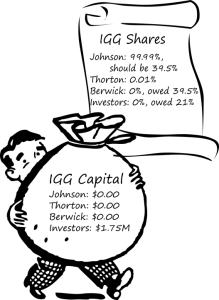 Of course, Ramirez and Ricardi get nothing if they were to get shares in the New Zealand Trustee, since the New Zealand structure doesn’t really exist–not that anyone else gets anything, mind you. But it does serve Ramirez and his Cracker Jack lawyer right for not performing their due diligence–just like many of us.

The situation remained as above to the end of 2013. Berwick realized he had been defrauded of his ownership in June and spent the remainder of the year arguing with Johnson for his interest. The equity investors got their commitment from Johnson for a bigger cut, but they couldn’t actually get the shares, as Johnson played his usual passive aggressive game. The trust lawyers repeatedly emailed Johnson, telling him that the trust structure in New Zealand was incomplete exposing GGC investors to double taxation. And Johnson continued to shuck and jive.

Then he met Mario Del Real.

We speculate that the locals realized Johnson was a scam artist. We suspect that Mario Osses, a local politician and lawyer, knew that Johnson’s operations violated all kinds of laws and he was therefore vulnerable. This pol sent his buddy, Mario Del Real, over to insinuate himself into the project. If this weren’t the plan, at least it is what happened. Ultimately, Del Real was not only able to wheedle his way into a management roll in GGC, he took over the board of directors and ownership, too.

Johnson, who didn’t have a pot to piss in only 15 months before, received the millions of dollars flowing into GGC. By the end of January 2014, Johnson had taken in $6.6 million in loans, payments for lots and payments for shares of the GGC agriculture entity, Agricola y Comercial Galt’s Gulch SpA. That was in addition to the $1.75 million from the equity investors. He must have thought he was a wheeling and dealing genius. When he should have been concerned with developing the real estate at GGC, he was trying to become important in the Bitcoin movement, and he even bid on more real estate, despite being past due on payments to Ramirez for the Lepe farm. And amazingly, despite Johnson’s failure to pay on time, Ramirez claims that he was working on other business deals with Johnson:

“Mr. Johnson and I are working on other projects in Chile that are quite interesting that involve energy and ecological systems. There is much opportunity here in Chile and we intend to participate in the opportunities.” –Guillermo Ramirez in a letter to Josh Kirley, Dec 21 2013.

Del Real dangled a fortune in water revenue in front of Johnson’s eyes with the Andean Rio Colorado project and Johnson had to have it. Water is the new oil, don’t ya know. 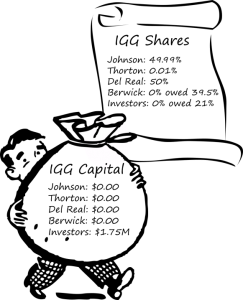 Meanwhile, Del Real in his new role as Chairman of the Board of IGG conducted a wild spree of writing, notarizing and registering a series of legal documents supposedly reporting on the many board and shareholder meetings he claimed he held. He expanded the number of shares of IGG from 10,000 to 1,000,000 and held all but the 5,000 still owned by Johnson. Del Real claims to have given 5,000 shares of IGG to engineer Fernando Antonio Hernandez Jara on June 20 2014. Hernandez supposedly was a contractor to GGC. Johnson, however, contests this, saying that Hernandez never worked for the project–sort of like Johnson, really.

The Recovery Team went public with the GGC fraud in August 2014.  In the face of our public exposure of Johnson’s perfidy, he was hit with an avalanche of refund requests, threats of civil and criminal litigation, and demands for payment of $2 million that he still owed Ramirez for the Lepe property. We had cut off his fraudulently induced income while his bills were piling up.

In desperation, Johnson turned to GGC investor, Jerry Folta. Folta, possibly thinking himself supremely clever, took advantage of Johnson’s impossible financial position and purportedly paid him $250,000 for 30% of IGG shares. Since Johnson had neither ownership nor control of the vast majority of the IGG shares, he gave Folta a contract called a promesa. This contract likely transfers 30% of IGG to Folta whenever Johnson is able to wrest shares from Del Real. Folta’s money did not go to capitalizing IGG but went straight into Johnson’s pocket. What he uses it for is anyone’s guess, but booze and gambling might be good ones. We can tell you what he definitely doesn’t use it for: paying employees. They have been reporting him to the labor board for months.

New information as of Aug 23, 2017. Folta’s fraud case against Del Real, as well as all other cases involving GGC, has been included in the criminal  investigation by the white collar crime prosecutor for the Republic of Chile. In Folta’s petition to be a victim of the GGC fraud, his lawyer included the contract mentioned above, which was not a promesa, as Johnson said, but a purchase and sale agreement. The dollar amount of $250,000 is in the contract, however, no proof of payment was provided.

By the time of the Folta contract on October 27 2014, GGC investors had paid $10.05 million. The real estate that GGC owned we generously value between $5 – 6 million. What a deal for Folta. Looks like he has his fellow investors’ interest at heart, doesn’t it? The ownership and funding looked like this: 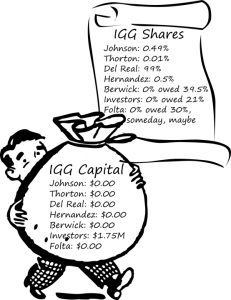 This is how the situation stands as of October 2017. We’ve created a graphic of all the changes detailed in this post. 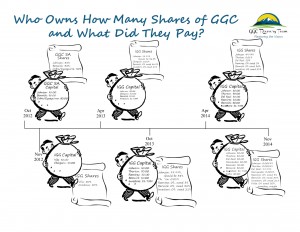 You might have noticed a pattern. From the very beginning, everyone who has owned shares of IGG has paid not one thin dime for them.* And everyone who has paid money into GGC owns not one share. How’s that for a perfect record?

By the way, these are the machination that we know about, but we would not be surprised to find that others are owed equity. For example, when cornered by an angry GGC investor who had put money into Rio Colorado and was demanding his funds back, Johnson said he would give him equity in GGC. How many others he promised shares, we can’t know.

Here’s one final twist to this saga. When Johnson was desperately looking for money to bribe Del Real out of IGG, he approached investor Josh Kirley and asked him for $1 million. In exchange for the money, Johnson said he would make Josh the protector of the New Zealand trust. Some how it must have slipped Johnson’s mind that the trust structure was incomplete, uncapitalized and had no relationship to IGG, the only Chilean corporation that owns assets. Hmm.

*One document for the transfer of 2,000 shares to Del Real says that he paid some trivial amount of money for them. We do not have proof that money changed hands, and if it did, it went into Johnson’s hands, not into capitalizing IGG.