“The project was brought to a standstill in April of last year [2014], with an orchestrated chain of refund requests. This orchestration involved Jeff Berwick, Chris Serin, Wendy McElroy (she was duped, in my estimation), Josh Kirley and a handful of former staff, whom (sic) are seeking a stake in GGC, even though they did nothing but loot it.”
–Ken Johnson, comment section, Panampost.com.

Johnson and GGC must have achieved a record for the quickest

failure of an affinity scam/Ponzi scheme in the history of financial crime. There are two reasons for this: 1. the abject incompetence of future convicted felon Johnson and 2. the integrity of Josh Kirley.

But first, we can’t stress enough the revulsion we feel reading Johnson’s attacks on his former employees. It is demonstrably ridiculous to think that they “looted” GGC. For one thing, only someone with access to the bank account could have done that and the employees did not have access. Further, the people to whom he refers were collectively gypped out of over $63,000. They are not seeking a stake in GGC. They are helping the investors because they feel obligated to us for being unwittingly used to steal from us. It’s their way of making amends.

The Abject Incompetence of Ken Johnson

It’s obvious that when running an affinity scam/Ponzi scheme, the optimal strategy is to structure it to run as long as possible. You want to put off that day of reckoning when the last sucker has put in that last dime and the jig is up. You also want to put away some bucks for your get away. You need to get out while the getting is good, never to return.

Johnson did none of that. His star may have burned out quickly, but it certainly did not burn brightly.

The contention that refund requests were orchestrated and “brought GGC to a standstill” in April of 2014 is false. The Recovery Team got the refund request list by polling the investors themselves, and at that time the dollar amount was insignificant. Besides, he only honored three requests: two in full on Sept 10 2013 and Nov 25 2013 and one in part in Aug 2013, all well before April 2014. How could refunds have caused problems when he didn’t pay up?

Here’s why Johnson quickly ran out of money, having nothing to do with The Recovery Team or refund requests or employees.

1. He paid too much for the real estate. Because the first property he bought was unsuitable for development, to keep the scam going he had to buy a second property. That property was just too expensive, and we believe he overpaid, as well. After paying for the real estate and pissing away the rest on lawyers, two residences, expensive restaurants, booze, and gambling, there was little left to build anything.

2. Simple financial mismanagement. He did not have anywhere near the funds to pay the $6.8 million purchase price for the second property, the agreement for which included crippling late penalties. Immediately after the closing on the property, he was unable to meet the aggressive eight month payment schedule. He incurred over $1 million in late fees in the last four months of 2013 alone.

3. He cheated his partner. Because he made these unsound land purchases, and because he defrauded Jeff Berwick of his 50% ownership of GGC, Jeff stopped marketing the project. Probably all GGC sales leads were generated through The Dollar Vigilante. This was an affinity scam after all, and Johnson was an unknown. He relied on Berwick’s libertarian readership for victims. That pipeline dried up in early 2014. Take a look. Johnson’s lie couldn’t be more obvious–income collapsed months before April 2014 even if there were an “orchestrated chain of refunds,” which there wasn’t. 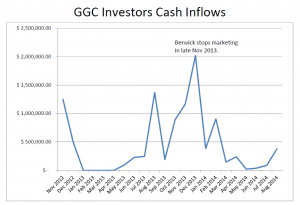 4. The con man was swindled. The GGC bank account was blocked in January 2014 for suspicious activity leaving the project without a way to accept investor funds. Johnson arranged with Chilean swindler, Mario Del Real, to use his daughter’s bank account for GGC business. The Del Reals, very predictably, proceeded to swipe the majority of the $1 million that went into that account.

5. More financial mismanagement. The GGC loans had a short payback period of just three years, with the initial 25% payment due on the loan’s first year anniversary. Johnson had no sinking fund for the loan payments and no bond or insurance for refunds, which is a felony in Chile. Loan payments began coming due in June 2014. That was the coup de grace for his fraud.

The Integrity of Josh Kirley

Josh is a major investor in GGC. When he began to realize that there were significant problems, rather than hope them away, he investigated and found the unpleasant truth. In mid-2014, Johnson was going to make another push for investor financing that could have been the source of Josh’s refund. Refusing to prey on new, unsuspecting victims to make himself whole and with the help of a second investor who has since passed away, Josh found and organized other GGC investors and blew the whistle. He has suffered slander and liable from  future convicted felon Johnson–and occasionally from Jerry Folta, we might add–ever since. 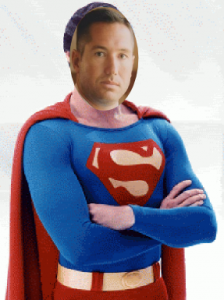 Josh Kirley. Fighting for truth, justice and the libertarian way.