We were listening to The Opperman Report the other day when we heard this GGC relevant observation:

Now, one thing that I’ve learned, in my work as a private investigator, especially now on the internet, I deal with a lot of people who get conned out of their money. Especially in these romance scams. I just had one woman recently, this woman contacts me and she says, “Ed, you know, I met this guy, he lives overseas, and he wants to send me a car. He told me to give him my bank account number so he could wire me some money. He never wired me the money. He said he’s sending me a car instead. Now I’m getting calls from this car transport/storage place, they want me to send them money or they’re going to charge me storage for the car. I never asked for this car.”

So I tell these women, I say, “Well, listen. First of all you’ve got to close that bank account, because now he has your bank account number, he can print out a check. Secondly, you need to make a police report. And don’t send these people any money. Stop communicating with this guy.”

“No they’re not. So, did you close your email account? Are you still talking to this guy?”

We have found this phenomenon with future convicted felon Johnson’s victims, too. More than one GGC investor, when contacted by the Recovery Team, were angry at us for telling them they were conned, and defended Johnson. We believe they were angry because we were interrupting their dream. Despite the crazy, invalid contracts, lack of communication, missed land and loan payments, nonpayment of dividends, stiffed employees and vendors, the Rio Colorado scam, no zoning approvals, the total lack of any progress in building anything they still wanted to believe GGC was all true.

One of these investors was, of course, our dear friend, Jerry Folta. He accused us of name calling, lying, libel and having a hidden agenda. All the other investors looked at our evidence and came to their senses, but not Jerry. To this day, he is supporting future convicted felon Johnson and claims to have paid him an additional wad of cash over his initial “investment.” Ugh.

Here’s another Opperman insight from that same podcast:

This also fits our friend Jerry. Jerry thought he bought a 25-acre lemon orchard with a “hacienda.” Having seen the marketing literature for that “investment”–and the “hacienda” (see blog post ”Capital Improvements: The Shacks—Oops, We Mean Haciendas—of GGC“)–we know that fcf Johnson was making “a claim that was so outrageous, and so unbelievable” that we’ve often said we wish we had the good luck to see that offer (see here, here and here) before we threw our money away on GGC. Even more amazing is that Jerry, well before the lemon orchard scam, caught Johnson trying to cheat him with an outrageous, unbelievable contract. In Jerry’s own words:

I was considering buying in and I asked Ken to send me the blank contract. As I carefully went through it I couldn’t believe what I 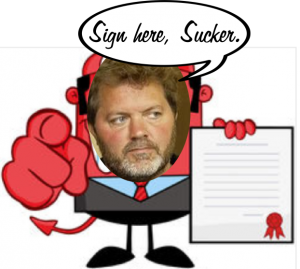 discovered. I had to turn the pages back and forth several times to wind through the legal paths in the contract but it clearly spelled out that once GGC sold me the property it could unilaterally decide to buy it back and, then, set the price at anything the General Manager (Ken Johnson) wanted – even $.01. I immediately thought, “He’s trying to screw me!”–Jerry Folta in an email to GGC investors, Oct 2 2014.

So why did he go ahead and enter into a contract with this obvious swindler? Jerry decided that since Johnson was willing to change the terms of the agreement, this wasn’t fraud, it was just Johnson following bad legal advice. (!?!) We are NOT making this up. We fancy ourselves as amateur comedians, but we’re not that clever. Here’s more from the same email:

I rewrote the offending portions of the contract in a way the original language was left intact but deletions/additions/changes were made in red so it was clear what I wanted to change. I also included what I described as written “rationales” for the changes I was proposing so he would understand why I wanted the changes and could better determine if he agreed the changes were fair.

After a couple days rewriting Ken and I went through the revised contract start to finish. With explanation and discussion it took a good while and at the end I waited for the verdict. After a brief pause Ken said, “Ok.” Not a single modification, not a single change, not a single objection to what I had written.

The conclusion I came to was the attorneys wrote the contracts as attorneys are wont to do; with as much protection as possible for Ken since he was the one paying them. Attorneys are usually not businessmen and the unfortunate way it came out under those circumstances was not appreciated by Ken. Also, the contracts were written in spanish [sic] and translated so both culturally and linguistically there is a great deal of uncertainty built into the situation. Still, once Ken saw my suggestions he immediately accepted them and, in fact, made it clear on several occasions afterward that he appreciated what I did because the work I contributed made GGC better – especially for other shareholder investors. Although it’s easy from the sidelines to fault Ken for not doing a better job of managing the attorneys, in a project this big, this ambitious, this undeveloped – these types of situations really should be expected to occur on a daily basis.

Seems clear to us that Jerry really wanted to believe, and fcf Johnson absolutely knew he had a helluva sucker on the line.

By the way, we’re always skeptical of the veracity of Folta’s retelling of the “facts” surrounding anything to do with Johnson, and certainly of his estimation of Johnson’s motives. Besides the obvious, that the information is second hand, passed from a congenital liar through a possible true believer,  we happen to know that these two collaborated on Folta’s tedious missives. How do we know? Because Jerry sent the following email message by mistake to the Recovery Team after he received one of our GGC Investor Updates:

Do you want to talk about a response to this?  If you’re going to reach a settlement soon it’s probably not necessary.  If we’re still fighting the good fight perhaps I should respond.

What do you think?

One final note: Johnson’s Chilean lawyers, fluent in English, said that Johnson wrote the contracts. His firm was asked to review what Johnson had written, usually at the last minute and sometimes after the contracts were signed. (!?!)