“On July 28, 2014, I offered to GGC clients, ownership in the land holding corporation of GGC. Following this offer, I awaited a response for my request to a discussion to arrive at a valuation for GGC, in order to then issue ownership to all GGC clients. My request for such a discussion was ignored by Josh Kirley, and those copied on that email, which was sent out in August of 2014, shortly before Mr. Berwick’s, Mr. Kirley’s and others’ planned public attacks on myself, as well as GGC, were carried out. ”
–Ken Johnson, from one of his patented endless, idiotic emails, June 3 2015.

Wow, it seems that Johnson came up with a great idea. 😉 To show all the “clients” that he meant well, and  that he’d love to share the wealth, he wanted to cut everyone in on the project, i.e. he’d give all of us equity in GGC. It was going to be his way of making us whole.

There’s just one teensy, weensy, little problem with that plan: we’re not stupid. Ok, we certainly were gullible when we started, but now that we’re wise to him, we’re not that stupid.

First, at the time of this offer, Johnson had lost both the management and ownership of Inmobiliaria Galt’s Gulch. He couldn’t give anyone shares even if he wanted to, and believe us, he didn’t want to. Second, IGG happens to be insolvent. If we were to become equity holders in IGG, we would be wiped out since equity claims are junior to creditors’ claims. We’ll keep our creditors’ claims, thanks.

This scheme was the inspiration for a new slogan for Li’l Kenny Johnson:

If all you know about this magnanimous offer is found in the paragraph that began this blog post, you would think that Josh refused to communicate with Johnson on this subject. “Poor Li’l Kenny,” you might think, “having to deal with that big, bad Josh Kirley.” You would be wrong, however, having been tricked again by Johnsonesque deception.

On July 15 2014, Josh contacted Johnson to discuss GGC’s dire situation. For those of you keeping score at home, that’s 11 days BEFORE the email offer to give investors GGC equity. Johnson accused Josh of offering to buy shares from Mario Del Real, and then of wanting to take shares away from Johnson. Josh replied: 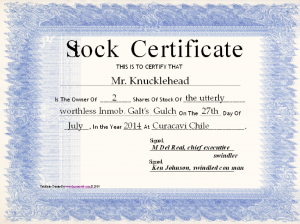 shares. I want less than zero shares. I think whether it’s you or Mario that has the shares right now, it’s worth less than zero. I want my loan back that I paid into, and the two plots of land that I paid for. I don’t see that happening with you and Mario fighting over the project. What does a share get you? To something that’s not paid off, that doesn’t have water and is $6 million in debt. I don’t want a share. I just want what I paid for from the beginning which were a hacienda, lemon orchards and the repayment of the loan.”

That seems pretty clear, doesn’t it? No equivocating there. But, unsurprisingly, Johnson couldn’t take “You’re an idiot” for an answer and pressed on. Josh was forced to reiterated:

Let’s spell out this dirty trick. Johnson went public with an offer that sounded generous but that he couldn’t complete–remember, he didn’t have control over the shares to give them to anyone–an offer that he knew ahead of time would be rejected by any rational person, and was already vehemently rejected by Josh. Then he patted himself on the back saying, “What a great guy I am,” and lied to outsiders about the incident.

Li’l Kenny should have been a politician.

Btw, we think it’s almost certain nobody tried to buy shares from Mario Del Real. This was either a lie from Del Real or from Johnson. At the time–and today, for that matter–they likely were in cahoots.