Donnelly Challenges Berwick about GGC.
Future Convicted Felon Johnson Gets
into the Act.

Future convicted felon Johnson has set about flapping his yap yet again. This time it’s on George Donnelly’s FB page here and here. Yes, Li’l Kenny has found what he thinks is another sucker. The last time it backfired on him. See our blog post, The Cantwell Interview: Johnson Cornered.

Donnelly (above), donning the mantle of truth seeker, is on a crusade to prove that Jeff Berwick was a scammer with regards to GGC. Of course, Li’l Kenny Fraudster had to get into the act.

Donnelly the truth seeker? Well, not really. He said he’ll only investigate the Galt’s Gulch Chile Affinity Fraud if both Berwick and Johnson co-operate with him. Really? Since when has a criminal like Johnson ever co-operated with an investigation? In other words, this looks like nothing more than click bait.

We are of two minds about this. Of course we support anyone who wants to investigate GGC since we know that they will find that Li’l Kenny is a thief and liar. However, we are always against the internecine wars of libertarians. There are more important battles to fight against the powers that shouldn’t be. Investigation into Galt’s Gulch Chile does not have to be this way.

Be that as it may, Donnelly gave the Fraudster a podium from which he could displaying his modus operandi of lies and character assassination. Anyone with a whit of sense can tell whom (!) to believe by reading the endless, nauseating posts spewed out by this limacine con artist who is living off us investors still, as he takes in money from the farm that should be ours. Oh, but he assures us he’s too busy building a community to spend time on social media. Yeah, right.

Li’l Kenny wrote, ” We’re presently winning all legal battles here in Chile, as those Berwick is aligned with continue to work with the Chilean real estate swindler…”

Fact: Johnson hasn’t won a single “battle.” All our cases and civil actions are moving forward. For instance, we recently won our arbitration for $1.3 million for his failure to uphold Josh Kirley’s contract. For proof check our time line post for May 18 2016 here (scroll down to the end). He’s calling that a win? If so, I hope he wins all his cases.

Further, we have absolutely nothing to do with the Chilean real estate swindler, Mario Del Real. At one point, we had to get Del Real’s permission to run the farm, but that was the extent of our association with him. In fact, we have a fraud case against him and his family, and an embezzlement case against his daughter in process right now. Again, check our time line for the facts and this blog post, Rio Colorado: The Con Man Got Conned. Johnson is the only one aligned with Del Real.

Li’l Kenny wrote, “It’s been a miserable experience seeing greedy cowards destroy what I was close to completing here, along with several other similar projects.”

Fact: GGC was never close to completion. It never got off the ground. There was no productive work done to turn the farm into a residential real estate development. NONE. All Johnson did was to piggy back on Berwick’s marketing and hustle unsuspecting libertarians to part with their money. And other similar projects? Where???

Li’l Kenny wrote, “The courts in Chile have dismissed all of the frivolous criminal actions against me.”

Fact. We have three criminal cases against Johnson, and none have been dismissed. All are going forward as we write.

Li’l Kenny wrote, “We were also busy this past year repairing and replacing all that the GGC “rescue” team stole, trafficked and destroyed here.”

Fact: We stole NOTHING. We destroyed NOTHING. As we documented in our blog posts, the “damage” to the property was all fictional. See:

Also, the chattels we sold were owned by GGC, not Johnson and therefore legally under our control and management at the time of sale. The money raised was paid to the farm workers for their salaries and benefits, something that Johnson didn’t do. There are 13 cases against Johnson with the Chilean pension administration for failing to pay the benefits of his workers. Go here and here for a list of these complaints.

We could go on, but you get the picture. There is not one sentence that comes out of Li’l Kenny Fraudster’s mouth that’s true. Not one.

Where did all the money go, Johnson? The accounting.
Who owns what at GGC? The legal documents.

We’ve been demanding this information since September 2014. Johnson claimed he wanted to be transparent and give us all the information. We’re still waiting two years later.

Btw, Johnson sold almost the entire Lepe house full of furniture and other chattels when he took over the property, yet the accounting for these sales has never been disclosed to the investors. We believe he dealt in cash, kept no records and he pocketed all the proceeds.

But hey, he’s building a community…

Mr. Donnelly, a week after announcing his Truth Campaign, posted this screen cap of a conversation with Jeff Berwick and called off the project. Mr. Donnelly blamed the demise on Jeff, of course. We have a different opinion. 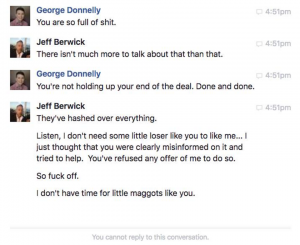 The Donnelly Truth Campaign began with Mr. Donnelly saying he would investigate GGC as an independent third party only if Jeff and future convicted felon Johnson cooperated with him, especially providing documents.

In other words, Mr. Donnelly never intended to investigate GGC at all. Bearing in mind that he is a graduate of the University of Chicago–Mr. Donnelly tells us so–consider the following:

Common sense says this does not add up. We submit that no one who is sincere, no one who is a true journalist would act this way. This seems little more than an exercise in click baiting, an example of the pestilence of social media.

Btw, we hope that Mr. Donnelly had the INTEGRITY to obtain Jeff’s permission to post the completely out-of-context snippet from what appears to be their private FB chat.

Publicly posting out-of-context, private communications is one of the more despicable practices of our internet age, don’t you agree?