We’ve added a note at the end of this post. The “cultural exchange” website with no conscience is Workaway.info.

He’s got two criminal cases against him in Chile, an FBI investigation into his illegal activities in the US and various civil actions against his previously owned corporations. He’s losing his public relations war

against us investors, having been outed on Panampost.com, Borderless Podcast, The Jet Setter Show and Christopher Cantwell.com. His Facebook page is a pathetic showing. The best he can do is post pix of flowers, and recycle nasty lies about the Recovery Team for both his followers. He’s had over three years of living off GGC investors, and he’s squirreled away upwards of $2 million. Any rational person would have gotten out of Dodge. People always ask us, “Has he left Chile?”

No he hasn’t, because Johnson’s not a rational person. He’s still squatting on the GGC Lepe property, but he hasn’t been idle. He’s been pulling off his next scam.

Cultural Exchange with a Crook

There are quite a few cultural exchange websites, where first-world backpackers can find opportunities to travel on the cheap, working for room and board as they go. Sounds great at first, but the reality can be at odds with what’s promoted, especially if a con man is the host and the website doesn’t do jack to vet their members.

FCF Johnson’s latest scam is posing as the owner of Lepe and convincing backpackers that working for him for free is a Chilean cultural exchange. Here’s a snippet from his host page, essentially an ad for indentured servants:

“We have a beautiful project in central Chile, with a 250-acre organic farm, new organic greenhouse, and endless hills and valleys, nestled in the beautiful coastal mountain range. We can always use help with a long list of items that revolve around maintaining, expanding and improving our large organic farm, our new organic greenhouse (more are planned for construction as we expand the farm an additional 30 hectares), our beautiful organic garden and completion of our remaining guest haciendas…among a few other things. The project has 4,500 hectares of land, with trails for hiking, mountain climbing, horseback riding, etc. There is a small river, swimming holes, etc. a short walk from the haciendas. We have a swimming pool that was recently cleaned by [the cultural exchange volunteers] and is now regularly used by our [volunteer] guests after a day of working on various projects.” 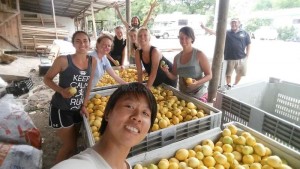 This photo was taken within the last month by a “cultural exchange volunteer” at GGC. Johnson is on the right, showing a peace sign to the people he’s scamming. Last we knew, SII, the Chilean version of the IRS, was prohibiting Johnson from selling lemons due to his flagrant violations of tax law. We wonder what SII will do when they see this pic.

“I am fairly new to the [cultural exchange] program, and have had a lot of inquiries. Myself and our full-time workers here have met some really nice people whom [sic] have come to stay with us and are staying with us now. It’s wonderful to meet people with a passion for organic food, thoughtful living and an eagerness to help others who share these passions. [Lay it on thick, Li’l Kenny.] I’m not the most organized person with the [cultural exchange] program so far, but we have some great [volunteers] who have stepped up to help others out when they arrive and also with finding the right things to help out with while here. I’m a believer in ‘the more, the merrier’, and tend to be a bit of a wall flower in larger groups, as I tend to generally just soak up the atmosphere and chill after a long day of dealing with architects, attorneys, produce buyers, errands, and more. I guess most ‘introverts’ can relate to this.”

Johnson likely removed the Galt’s Gulch Chile sign at the entrance to the Lepe farm to make sure that the “volunteers” don’t do an internet search and stumble upon his fraud.

We’ll spare you the part about Johnson’s often mentioned plans for an animal sanctuary. It brought tears to our eyes.

In reviewing the exchange’s website, we found that their terms and conditions explicitly state their program is for cultural exchange only:

“[Our website] is NOT set up to provide or replace employment opportunities. We will remove hosts that we deem are not providing cultural exchange or educational possibilities.” [Emphasis theirs.]

At the same time that FCF Johnson has all these ‘volunteers” not only performing farm work, but also apparently renovating the various buildings that he left in a shambles, he has NOT been paying the few Chilean workers who are left at the farm.

“Any [volunteers] interested in taking on, or creating, a project that fits their life goals, career skills, or dream job, are welcome to talk with me and create a new project for the farm, eco-tourism, hospitality, bio-diversity, marketing, etc. I’m a firm believer in those who put their heart into something being rewarded from and for it…and who knows…maybe you will want to stay and create your own business here, based on taking care of our environment, growing great healthy food, teaching others, etc.”

Rather than a cultural exchange opportunity, this sounds like a con man using every fad currently  in vogue with first world backpacking types to try to sucker these well-meaning people into being his slaves. Unfortunately, it appears to be working.

Clearly, this exchange website did absolutely nothing to vet Johnson, including review his ad which violates their terms and conditions. They certainly didn’t verify his ownership of the farm–since he doesn’t own it, how could they? To be fair, a determined con man, which of course FCF Johnson is, could easily fake documents. Nevertheless, a quick review of his ad should have made them concerned.

The cultural exchange program’s terms and conditions also state that “all the hosts agree to maintain and update information in their account making sure it is accurate and truthful and complies with the laws of their country.” Since Li’l Kenny didn’t hold up this part of the agreement, we thought we’d help him. You know, he is really busy with lawyers and architects. We contacted the website to inform them that:

They removed his host page. 🙂

Btw, we took the liberty of contacting all the other online exchange programs to inform them that FCF Johnson may be applying for host status now that his current situation has ended. They are on the look out for him, including under pseudonyms.

Maybe we should have a contest. Who can correctly predict Li’l Kenny’s next scam? We know there is one. As Professor Harold Hill said to Winthrop in The Music Man, “I always think there’s a band, kid.”

FINAL NOTE: We did not disclose the name of the “cultural exchange” website since we felt that their blocking Johnson was really stand-up and didn’t want them to suffer any negative publicity. That has now changed.

About one month after having his host page taken down, Johnson submitted a new host page under a pseudonym. We were checking for this, identified his new host page immediately and contacted the cultural exchange service asking them to block him again. Either they are terribly naive or in cahoots with Li’l Kenny Fraudster, because try as we may, we can’t convince them that this new host is in fact Johnson.

The website is Workaway.info. They are violating their own guidelines, supplying free labor rather than a cultural exchange, and aiding and abettng Johnson in violating multiple Chilean laws. They clearly don’t care about the safety of their volunteers since they have no problem connecting them with someone who has committed assault on his co-workers, and who hired Mafiosi to terrorize Chilean workers.