When everybody’s recommending a sure-fire investment opportunity, we should all be smart enough to run. Too bad we GGC “investors” weren’t. 🙁 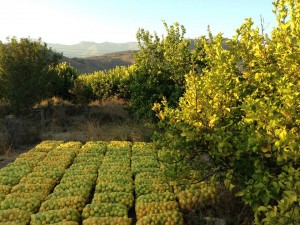 orchards and 7ish hectares of dead and dying avocado trees. This allowed Johnson to jump on the trendy Latin American agriculture investment bandwagon with his orchard and farm share program.

He proposed to subdivide the existing ag area into five 10 hectare lemon orchards and one 50 hectare plot. The smaller orchards were sold to individual investors, while the larger area that included lemons and dead avocado trees as well as uncultivated fields were to be deeded to a Johnson-owned corporation, Agricola y Comercial Galt’s Gulch SpA. Johnson would then sell shares of Agricola to investors, with a contract to manage the orchards for a percentage of the lemon profits, the remainder paid as a  quarterly dividend. The revenue was to go to improving the existing infrastructure and expanding the hectares under cultivation–remember all that excess water.

Read the projections for this farm venture here, here and here. (Split into three sections due to file size.) This whole document is worth reading, but one of our fav parts is Johnson’s bio:

“Ken Johnson, GGC managing partner, has an extensive background in the fields of  real estate, alternative medicine, and the environmental and

renewable energy industries. Mr. Johnson has worked with numerous high-profile Hollywood celebrities, such as Jay Leno, Ed Begley Jr., Larry Hagman and others on television and internet projects to educate the public and brand product lines in the environmental industry. He has worked as a consultant in real estate, renewable energies, asset diversification, investing and relocation around the globe.”

That’s quite impressive. Let’s see if we can decode that paragraph.

“Ken Johnson, GGC manager (currently squatter), was a flunky California real estate agent, who lost his shirt in the collapse of 2007-8. He’s read up on vitamins and now lives on a steady liquid diet. His gig prior to GGC and The Dollar Vigilante was with Enviro-Energies, where he fleeced unsuspecting customers by selling windmills that didn’t work. As part of the windmill scam, Johnson had his picture taken

with Hollywood celebrities who were more than willing to lend their names without checking into the corporation first. (Sound familiar?) Chased out of California due to bankruptcy and tax problems, Johnson took up selling fraudulent passports, most notably in Paraguay, aka ‘consulting in relocation around the globe.'”

Read the FBI press release about Enviro-Energies and you’ll see where Johnson cut his teeth in the scam industry. Johnson’s

business plan with Agricola looks eerily similar to Rowan’s. The Agricola “prospectus” is a stream-of-consciousness irrelevancy that in and of itself may constitute fraud.

Johnson thought he couldn’t wait for the subdivision approvals to be completed before he started selling Agricola shares and orchards. He had an aggressive payment schedule to Guillermo Ramirez for the Lepe purchase hanging over his head and needed the money.

All the 10 hectare orchards sold, but only 30% of Agricola shares. Not many financial advisers would recommend buying shares in a

company that owns nothing. The revenue from the farm program was split between Ramirez to purchase the Lepe property, and Del Real who stole roughly $1 million. Virtually nothing went to upgrade the farm.  Agricola stock was never delivered to the share buyers, and the only dividends paid were to the few people who bought shares on crypto-trade.

We were listening to Johnny Mueller’s Expat Files recently. He gave his opinion on Latin American ag investments. He said that theft will be a problem, and we can tell you he is absolutely correct. While at the farm, we witnessed the farm manager catching the pickers stuffing backpacks, pockets and truck compartments with lemons to smuggle them off the property. We calculated they were stealing at least 10% of what they harvested. The managers also told us that the trees along the highway are regularly poached.

So maybe that fantastic mango orchard in Panama projected to return 18% isn’t such a sure thing. And neither is a lemon orchard in Chile. *sigh*

By the way, Johnson did finally submit his application to subdivide the ag area, a necessary requirement for him to complete the sale of the orchards. This was a straight forward process because it didn’t require a change in land use. The subdivision was granted within about two weeks and cost approximately $5,000. He did this as a public relations measure after we investors went public with his perfidy. He trots out this approval as proof he can accomplish something. Of course, it says nothing about achieving the residential master plan which was rejected when first submitted. Further, he has yet to transfer the orchard lot titles to the investors and Agricola. Do you think the transfer tax might have something to do with that?