“The phrase “Potemkin village” (also “Potyomkin village“, derived from the Russian  Потёмкинские деревни, Potyomkinskiye derevni) was originally used to describe a fake portable village, built only to impress. According to the story, Grigory Potemkin erected the fake portable settlement along the banks of the Dnieper River in order to fool Empress Catherine II during her journey to Crimea in 1787. The phrase is now used, typically in politics and economics, to describe any construction (literal or figurative) built solely to deceive others into thinking that some situation is better than it really is.”
Wikipedia.org

You might enquire, “So you people say that Johnson didn’t make any progress on the development. But he had two events at the property. Didn’t any investors go to these events, and didn’t anyone notice that nothing was happening?”

Well, yes, there were two marketing events at GGC, held at the farm on the Lepe property. And many investors went to these events. These were affinity scam events, for sure, where Johnson paid several lib celebs to show up and schmooze with his marks. 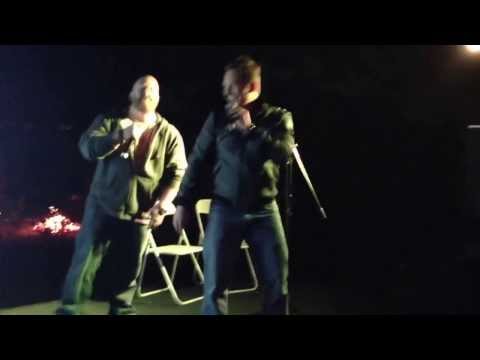 Johnson may be crooked, but he’s clever. In addition to the celebrity “entertainment” seen above, he prepared his Potemkin Village for each event.

The first event was shortly after Johnson closed on the disastrous Lepe purchase and no one expected great progress.  However, we 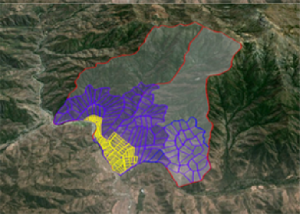 are told that he had the architects draw plot lines on satellite maps of Lepe as if there were a master plan in place. He even took individual investors to their “lots”–what lots, we don’t  know, since there was no subdivision approval–and told them he was reserving that land for them.

Johnson also hired road grading equipment and sent it up into the  Lepe hills. Many people were impressed with this. Yes, he did have a short stretch of road widened and graded, but so what? It led to nothing. 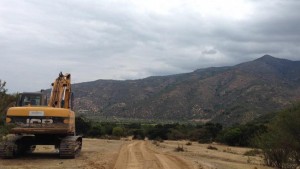 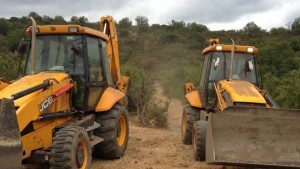 With the second event, Johnson put more effort into his Potemkin Village. He had renovations begun on the hacienda, aka club house, on the farm manager’s residence, and on some cabins scattered in the lemon orchards. The renovations on the hacienda and manager’s residence were never completed. But the new deck on the club house, which he didn’t pay for, was a big hit so many people didn’t seem to care.

Johnson had been making a big push on selling shares of the farm company he incorporated, Agricola y Comercial Galt’s Gulch. This company was supposed to own 50 acres of lemon orchard and 75 acres or so of additional land for fruit trees and row crops. Share sales were disappointing, however, because Johnson had not transferred ownership of the land to the company. Very few financial advisors would recommend to their clients buying into a shell company that may, some day, acquire farm land in Latin America.

At the second event, he tried to boost farm share sales by planting a small field not far from the club house with row crops. We spoke to a couple of investors who were fooled by this trick. For some reason we can’t understand, they thought that three acres of lettuce was progress. After the event, Johnson left the field unattended for the birds and rodents to destroy.

Not everyone was fooled by Johnson’s tricks. The insurrection among the investors that continues today and will end in an orange jump suit for Li’l Kenny really took off at the second event at GGC. Unlike the first event, where the investors sold the GGC concept to each other, during the second event, many figured out there was trouble in our libertarian paradise. In the end, Johnson’s Potemkin Village backfired.

Oh, by the way, Johnson fancies himself as an environmentalist. That earth moving equipment above not only moved earth, but cut down some protected trees. What did tree hugger Johnson do about it? Well, what every good environmentalist would do. He had the workers bury the stumps so Chilean government officials wouldn’t find out, of course.